This article is part of a series on using WordPress plugins for your online business.

Once you start taking a look at the different plugins available for WordPress, it becomes easy to see why this platform has become so popular. The seemingly endless possibilities for adding new features can spark all kinds of creative ideas for improving your website.

However, this excitement can quickly turn to overwhelm when you realize just how many plugins there are, especially the large numbers that seem to do exactly the same job.

How to Choose the Right Plugin

So while we covered where to find, and how to install WordPress plugins on your site in the last issue, we are now going to look at how can go about ensuring you choose the right plugin from the many options available.

What Features Do You Really Need?

Once you’ve decided that you need to add a new feature to your WordPress site, it’s important to know exactly how you want that feature to work. For example, while there are many eCommerce plugins for creating an online store, they all work in slightly different ways, with some being better than others in different areas.

It’s important to know which elements of a certain feature are most important to you. While one eCommerce plugin for example might be widely regarded as the best, it might not be so great at delivering a particular sub-feature you need.

By being clear on how you want your site to work, it will be easier to find a plugin that matches your requirements.

If you are looking for a free plugin at the WordPress.org repository, there are a few indicators you can use to determine the quality of a plugin. The main indicator that will jump out at you is the star rating.

Although anyone can rate a plugin, even if they’ve not used it, a high rating of over four stars out of five can be a strong sign a plugin is good enough for a client facing site, much in the way a low three star or below rating can sound alarm bells. 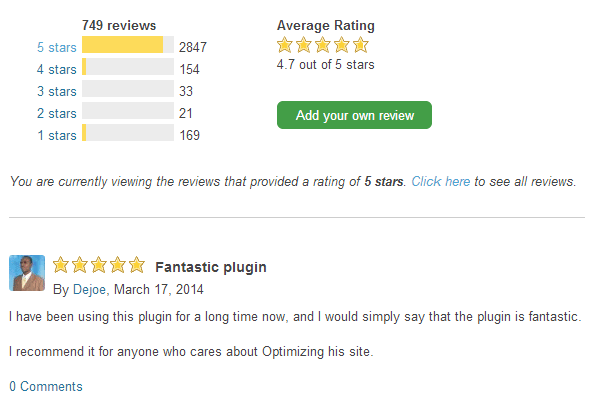 As the repository displays a breakdown of the star ratings given to a particular plugin, you can quickly see how many people did give it five stars for example. This makes it easier to make sense of the overall score and spot any plugins that get strong mixed reviews.

In addition to the star rating, you can also see how many times the plugin has been downloaded. This can be a great indicator of the quality of the plugin, with the most popular plugins being downloaded millions of times. However, if your needs are quite specific then don’t always expect large numbers of downloads for a niche plugin.

At the WordPress.org plugin repository, you can also read reviews left by those who’ve hopefully used the plugin. These can be filtered by star rating, allowing you to see if the reasons a plugin was given a one star rating are relevant to your needs.  For premium plugins, the Code Canyon marketplace has a similar rating and reviews system in place.

In both the case of free and premium plugins, it is also a good idea to search the internet for reviews of any plugins you are interested in to get more information on them.

How well a plugin is supported and how regularly it gets updated is an important factor to take into consideration. Free plugins available from the WordPress.org site are mostly supported via the forums at that site.

While these free plugins are often supported by the developer, this isn’t always the case. You can get a good indication of the level of support on offer by clicking on the ‘View Support Forum’ button for any plugins you are interested in.

As the WordPress software is updated on a regular basis, some changes can have negative consequences for plugins. This makes it important to check when a plugin was last updated, in order to try and determine if it is still being looked after by the developers.

For premium plugins, support is often included as part of the price of the plugin, or for an additional fee. The support is usually managed through a separate website which can sometimes only be accessed by existing customers. This can make it hard to establish the level and quality of support on offer, before you’ve handed over your hard earned cash. Seeking out reviews of the plugins can again shed some light what type of support is offered.

Even if you are only considering free plugins, it’s important to determine if they are offered on a freemium basis or not. This means there is a free and a premium version of the plugin, with the former having less features than the paid for version. In this case it’s important to establish exactly which features are missing and whether they are ones you will need.

Some free plugins can also be expanded by paying for premium extensions or addons. While a free plugin might be tempting, if important features your site will require now, or at a later date are only available as a paid extension, make sure you factor in the costs when comparing plugins.

More and more premium plugins are now available on yearly plans, rather than priced with a one-time payment. While you can still use the plugin after the year is up without renewing, this will often exclude you from using the support service as well as receiving any updates that are released.

As with most products, when comparing plugins, price shouldn’t be the only criteria you use to compare the different options, but it should still be factored into your final decision.

What other features do the plugins include besides the ones you require? This can sometimes help you make a decision when comparing plugins, however, it’s important not to get distracted by features you don’t need and won’t use.

Too many features can often mean a plugin is complicated to configure and setup. Numerous features can even raise questions as to how well the developers have managed to fully implement each of the different features, compared to a developer that has focused on just one or two key features.

When it comes to picking a WordPress plugin, the hardest part often isn’t finding one to solve your problem, but deciding which of the many options available is the right choice for you. In this article we have covered some of the main criteria that can be used to help you evaluate the different options available when choosing a plugin, including:

Hopefully you now have enough information to go about selecting the right plugin for your needs.

CSS Hero: A Plugin to Let You Quickly Change the Appearance of Your Site

Options for Creating Landing Pages for Your WordPress Site: Which One is Right for You?

One Response to How to Pick the Right WordPress Plugin