On WPShout, a WordPress blog we run, I recently wrote about how long it takes a developer to do a number of discrete jobs in WordPress. The post was motivated by a great article at another site about how much a WordPress site should cost.

The main reason so few people discuss website pricing is because “a website” can cost literally any amount to build.

Both of these articles contain a lot of statements to the effect of, “These numbers are the best we can make them, but please don’t take any of them too seriously because they’re likely to be way off from your actual experience.”

These statements are true, and necessary. The main reason so few people discuss website pricing is because “a website” can cost literally any amount to build, depending on your needs for it.

You wouldn’t have the same problems in an article on, say, haircut prices—and an article like that wouldn’t take nearly as much audacity to write in the first place. Why is this?

A big part of the reason is complexity. Let’s look at that term as it relates to web projects.

For a web developer, “complexity” can be defined as: Everything that is impossible or very difficult to know at the beginning of a project, and which only becomes clear during the project itself.

With complex web projects, almost the whole job is learning how to do the job itself.

The difference between a haircut and a web project is the degree of complexity. The job of giving a “men’s haircut” can vary a good deal based on the man in question, but the process is largely understood before it is begun, making it easy to price predictably.

With complex web projects, however, almost the whole job is learning how to do the job itself. That’s a lot trickier proposition. 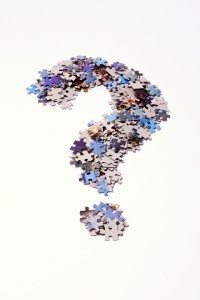 Let’s examine complexity through an analogy to an activity with some similarities to web development: putting together jigsaw puzzles.

Let’s say you put jigsaw puzzles together professionally. Your clients want the puzzles put together as quickly and as cheaply as possible; they’re likely to hire the lowest-bidding puzzle builder, but they’ll also want the puzzle completed within that bid.

First, let’s ask what your job is. It’s not the manual process of putting pieces together. If you already know how everything fits together (say, if the pieces are numbered), then that process takes almost no time at all. What’s more, it can be done by anyone, certainly by someone much cheaper than you.

The only thing you can do is guess, but you can guess with more or less skill.

So how do you estimate how long it’ll take you to resolve the complexity of a puzzle? If you knew the nature of the puzzle’s complexity, you’d already have solved it, and there would basically be no project (except maybe numbering all the pieces so someone else could snap them together for cheap). But there your employers are, wanting a firm number you’re ready to stand behind…

The only thing you can do is guess.

You can guess with more or less skill. Inexperienced puzzle makers are prone to throwing out a low number that will satisfy their employers, and then either abandoning the project or taking huge financial losses when the estimate turns out to be unachievable.

Experienced puzzle makers follow some established practices to get their guess as close as possible to the truth:

Hopefully, this extended analogy has given you a bit of an idea what it’s like to bid on and execute complex development work. And, somewhat gratifyingly, I noticed that no one will give you a reliable answer for how long a 1,000-piece puzzle takes to complete—because of the complexity! So we’re on the right track here.

If you consider the differences between puzzles and web projects, you’ll realize that development work is significantly more unpredictable than puzzle assembling. For example, a web developer can hit dead ends, forcing him or her to rethink the final product itself.

Let’s take a look at some of the major sources of complexity in web work.

Sources of Complexity in Web Development

Developers often don’t know how to build a particular project until they’ve done it.

These are generic descriptions of some key reasons why developers often don’t know how to build a particular project until they’ve done it. There are doubtless many others, but these crop up all the time:

These fundamental sources of complexity are a big part of the reason why developers, acting in good faith, are prone to throw such crazy numbers around when they estimate a project.

How Complex is your Web Project?

Not all web projects are of equal complexity. Creating a simple site to display information about a small business, or a basic blog site, are both well-defined jobs with relatively little complexity. This means that it’s possible to predict how long they take and how much they should cost with much more accuracy than less repeatable projects.

Other projects are much more complex, and it’s hard to say much at all about them before diving in. In general, your web project becomes more complex as the number of novel tasks required to complete it increases. Anything a web developer has never done before is a pool of complexity.

Unfortunately, you, as a client, are not usually in a good place to judge what is and isn’t novel about your project. However, you can talk to a lot of developers and ask them what pieces can be handled using established practices, and you should start to get a sense.

Complexity makes web work unpredictable and very difficult to budget, but it’s also a lot of what makes it fun. Without complexity—without being paid to learn—web work becomes a race to see who can push buttons the fastest and cheapest. If you’re a developer and in the industry for the right reasons, that’s a race you want to lose.

I hope you’ve found this exploration of the dark, misty confusion of complexity simple and illuminating! If you have any questions or comments, I’d love to hear them below.

5 Responses to Complexity in Web Development: A Simple Guide

Site Support: Understanding Your Options
What WordPress Can’t Do For You